="en" lang="en"> In the medical response to Ebola, Cuba is punching far above its weight | LA TECLA CON CAFÉ

In the medical response to Ebola, Cuba is punching far above its weight 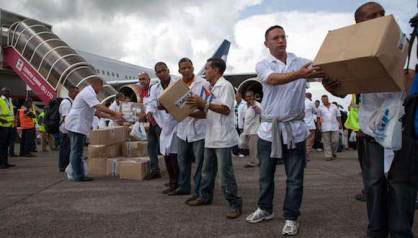 (Picture: The first members of a team of 165 Cuban doctors and workers of the health discharge themselves the boxes of medications and medical material from an airplane to their arrival to the airport of Freetown to help to the fight against the Ébola in Sierra Lioness, October 2 2014.  FLORIAN PLAUCHEUR / AFP / Getty Images / Washington Post)

While the international community has been accused of dragging its feet on the Ebola crisis, Cuba, a country of just 11 million people that still enjoys a fraught relationship with the United States, has emerged as a crucial provider of medical expertise in the West African nations hit by Ebola.

On Thursday, 165 health professionals from the country arrived in Freetown, Sierra Leone, to join the fight against Ebola – the largest medical team of any single foreign nation, according to the World Health Organization (WHO). And after being trained to deal with Ebola, a further 296 Cuban doctors and nurses will go to Liberia and Guinea, the other two countries worst hit by the crisis.

Cuba is, by any measure, not a wealthy country. It had a Gross Domestic Product (GDP) of slightly more than  billion in 2011, according to the World Bank, putting it a few places higher than Belarus. At ,051, its GDP per capita was less than one-sixth of Britain’s. However, its official response to Ebola seems far more robust than many countries far wealthier than it – and serves as further proof that health-care professionals are up there with rum and cigars in terms of Cuban exports.

Cuba’s universal health-care system enables such an export. The country nationalized its health care shortly after its revolution, ending private health care and guaranteeing free health care in its constitution. The results have been widely praised. In 2008, evaluating 30 years of Cuba’s "primary health care revolution," the WHO noted impressive strides that the country had made in certain health indicators. "These indicators— which are close or equal to those in developed countries —speak for themselves," Gail Reed noted, pointing to a huge reduction in number of deaths for children under five years old and Cuba’s high life expectancy of 77 years.

Cuba’s health-care success is built upon its medical training. After the Cuban revolution, half of the country’s 6,000 doctors fled and the country was forced to rebuild its work force. The training system grew so much that by 2008, it was training 20,000 foreigners a year to be doctors, nurses and dentists, largely free of charge.

Ebola isn’t the first time that Cuban health workers have been sent to deal with a global disaster. Even back in 1960, immediately after the revolution, Cuba sent doctors to Chile to help in the aftermath of a devastating earthquake, and the practice has continued for decades since. In 2005, Cuba even offered to send medical workers to the United States after Hurricane Katrina in 2005 (they were apparently rebuffed).

Reuters reports that Cuba currently has around 50,000 health workers working in 66 countries. Despite the high-profile acts of charity, the medical diplomacy more often seemed to serve more practical purposes – an estimated 30,000 health workers are currently in Venezuela as a partial payment for oil, for example. Exported medical expertise is predicted to net Cuba .2 billion in 2014, according to a recent report in state newspaper Granma. There are hopes that medical tourism and exported medical technology could one day provide similar figures.

It’s not a simple picture. Critics have complained that Cuba has begun to sacrifice the health of its citizens at home to make money sending medical workers abroad, and the conditions for these medical workers themselves have been criticized The Los Angeles Times reported earlier this year that a significant number of Cuban health-care workers in Venezuela have fled the country to escape "crushing" workloads. **

Even so, Cuba’s oversized response to Ebola seems to have brushed aside these criticisms, for now at least. The number of Cuban medical staff in Sierra Leone, Liberia and Guinea looks set to be more than those sent from far-larger countries like China. Israel, a wealthier country with a similar population, caused controversy this week when it rejected calls to send medical teams.

*Adam Taylor writes about foreign affairs for The Washington Post. Originally from London, he studied at the University of Manchester and Columbia University.

** Note of Cubadebate: When speaking of the benefits of health in Cuba and the migration of some workers of the health from the missions, The Washington Post, he ignores or it obviates some analysis elements that we find important to point: In spite of the thousands of Cuban doctors in solidary missions, Cuba continues being among the first 5 countries of the world with more proportion of doctors for inhabitants lending services in its national system of health.

In the medical response to Ebola, Cuba is punching far above its weight | <a href="http://amigaswebs.blogspot.com/2010/12/traductor-con-banderas-animadas-para-tu.html/" target="_parent">Traductor</a>