Evo Morales: We Will Confront US Economic Aggression 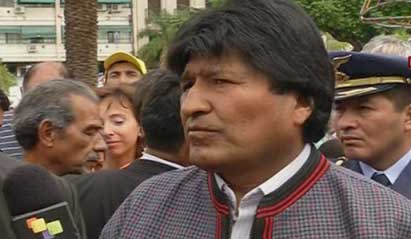 Strengthening regional unity will move Latin America away from U.S. dominance, says the Bolivian president in an exclusive interview with teleSUR.

Bolivian President Evo Morales said regional cooperation is the key to overcoming economic aggression toward Latin America by the U.S., in an exclusive interview with teleSUR from Argentina.

“The drop in oil prices is clear economic aggression against Venezuela and Russia,” Morales expanded.

Morales explained some of Bolivia's history of U.S. economic domination, explaining that the United States' method is to “dominate politically to dominate economically.”

The most important way to get away from this, Bolivia's president said, was strengthening the regional blocs.

Referring to the regional bodies that unite Latin American countries politically and commercially, Morales said, “UNASUR and MERCOSUR are necessary for economic integration.”

He also mentioned the regional ALBA bloc, which recently celebrated its 10th anniversary, thanking it for its support for Bolivia's bid to regain access to the sea. Morales participated in the ALBA summit this weekend in Cuba, and is now in Argentina to participate in the MERCOSUR summit where Bolivia will be voted to join as a full member nation.

Referring to former leaders of Venezuela, Argentina, Cuba and Brazil respectively, Morales said, “Through Hugo Chavez, Kirchner and Fidel Castro, these integration processes have changed Bolivia's history … Bolivia will never forget them … nor the support of Lula Da Silva.”

Indeed, the efforts of these leaders have not only changed Morales' own country, but the whole of Latin American history, Morales said.

Evo Morales: We Will Confront US Economic Aggression | <a href="http://amigaswebs.blogspot.com/2010/12/traductor-con-banderas-animadas-para-tu.html/" target="_parent">Traductor</a>