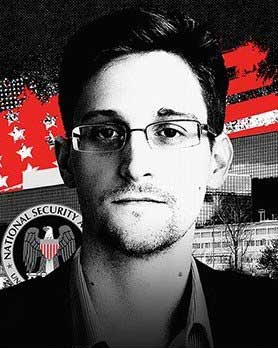 New York, New York: Edward Snowden is the most wanted and most admired whistle-blower of our time. Exiled for now in Moscow, he keeps his watch set on American time, to stay in better touch with his homeland and its security set-up.

Never before has someone in hiding been so visible, almost as if he operates his own media channel to channel out new once secret tidbits drenched in intrigue, and then to channel in journalists with whom he does interviews, sometimes for hours, sometimes for days.

In addition to the journalists he has cultivated like Glenn Greenwald and Laura Poitras who run a transmission belt of disclosures mined from his seemingly endless archive, there's Barton Gellman, the prodigious national security investigator for the Washington Post, other top journos seem to be trekking to and through his new domicile in the Russian capital.

Brian Williams of NBC did his big “get” as interviews are known in the TV network news world. That probably got him his biggest audience as he revealed that he had been more than a rogue crypto-geek, but a full fledged trained spy.

And then, Alan Russbridger, the editor of the Guardian, the newspaper that broke the story in Hong Kong thanks to Glenn Greenwald, finally got to met him face to face along with his long time editor-correspondent, Ewen MacAaskill. Together they conducted a substantive conversation that produced a lovely spread complete with a video and photo session. They spent hours together with Snowden, dropping a few new “bombshells” and providing new juicy details about how he’s coping with being in Russia. The answer: apparently very well.

Not to be outdone, WIRED magazine, the publication that specializes in technology stories, sent James Bamford who had written early investigative books about the National Security Agency to Moscow to see him.

Bamford was the most informed veteran journo of the lot, and Snowden devoted days to accommodate him and his photo and video team. He must have already been a WIRED aficionado, and was delighted to get a cover story complete with a photo of him cuddling an American flag.

That must have pissed off his old NSA mates because of the chutzpah of his being portrayed as a patriotic cover boy when they saw him as a traitor or worse.

Snowden has been known for his sense of humor, calling himself “The Big Hooha” online, and living with a girlfriend known for pole dancing and selfie-photos in her underwear. She was an artist who also in the Cindy Lauper spirit just wanted to have fun. So, Snowden posing with a flag was not out of character. It just made him even ‘cooler’ to his fans.

Snowden has also been conference-hopping via satellite or online transmission with appearances at major conferences like TED and others to accept freedom of speech awards.

These events not only gave thousands of supporters a chance to see and hear him, but further legitimated his image a warrior against spying and for privacy and freedom while the government kept leaking suggestions that he had gone over to the other side, He denies working with any foreign intelligence agency, and there’s been no proof of his having done so.

This does not mean that everyone respects him for his courage and making surveillance secrets public. Questions about his politics and strategy are now being raised within the broad-based digital freedom movement.

For starters, Snowden never made any secret of his libertarian leanings, even as he appeared with radicals like anti-war activist/whistleblower Daniel Ellsberg. I saw him live via video at the Hackers on Planet Earth Conference (HOPE) in New York in a hotel where decades earlier, Frank Olson, a victim of CIA LSD experiments plunged to his death from a window.

As a former network producer, I can say with some experience how good he has become in using media platforms even though he first said he would leave that to others. In the age of celebrity driven TV, he couldn’t remain anonymous for long. He knows how to use the medium well with slow and deliberative responses. His being telegenic doesn’t hurt.

Snowden and Ellsberg had a mutual admiration soiree, and for all the world, it appeared like he had been radicalized and was now opposing US foreign policy and backing major reform of government.

But then, when interviewed by James Bamford, he said he put his faith in technology, not Washington.

Surveillance critics like William Blunden find his narrative “over-simplified and dangerous,” adding, “If Snowden is still a libertarian then he would want to downplay the role government; to attack policy-making structures without addressing avenues of reform.

Writing on Counterpunch, he added, “To seek refuge in strong encryption is to escape into denial. Bolstering security and protecting our civil liberties will require the public to mobilize and generate the political impetus to take on the Deep State.”

Others who admire Snowden are questioning his distribution strategy of dribbling out documents to selective news outlets. At first, it was just the Guardian, via Glenn Greenwald, and then The Intercept funded by Pierre Olmidiyar. Later, the Washington Post’s Washington Post’s Bart Gellman disclosed he had an archive too.

After being confronted by the British government that smashed some computer hard disks, it was revealed that the Guardian deposited its Snowden data with the New York Times for safekeeping. So there has been some proliferation, but under tight if competing media control.

Writing in the Berliner Gazette, Krystian Woznick says “Open the Snowden Files!” asking: “Why has there been no mass protest? Why no major upheaval?”

“My thesis: The public interest has not been exhausted yet. This has also to do with the fact, that the access to the documents of the NSA-Gate remains closed. Material, that one exceptionally brave citizen put together "at the risk of his life" (Constanze Kurz) because he considered it to be of public interest  —this material is not at the disposal of the public now—. It has been rendered inaccessible again, devoid of public control. This blocks the democratic potential of the Snowden disclosures.

Only a very small percentage of those files has been made available to the public so far. A small circle of people decides about that, being able to access, read, analyze, interpret and publish the Snowden files. Those who belong to the small circle of people tend to argue, that this has to do with security reasons. In this sense one can say, that the leaked files have been "secured" in order to prevent bigger harm. There is also the obvious argument, that this method enables the long lasting media narrative to enfold —a sustaining visibility that some observers identify as the life insurance of the whistle-blower. But what if, in the very sense that "data is the oil of the 21st century" what if the Snowden files have been privatized by people who try to exploit them according to their own interests?”

Some websites like Cryptome are zealously investigating just how many of the documents he leaked have been released, demanding information from media outlets they are not receiving.

The Snowden model of controlled dissemination is now being challenged by the Assange/Wikileaks model of putting all the documents out there, perhaps with some encryption and, then, letting the chips fall where they may. The new head of the NSA is also minimizing the impact of the Snowden disclosures on his agency.

This is a fluid situation where anything could happen, and probably will.

News Dissector Danny Schechter is writing a book for Seven Stories Press on Surveillance and just completed a TV series on the subject. He edits Mediachannel.org and blogs at newsdissector.net.

* Newsdissector Danny Schechter blogs at Newsdissector.net and edits Mediachannel.org. He made the film Weapons of Mass Deception about media coverage in Iraq, and wrote two books about media misrepresentations there.