Unions Mobilize in Support of Rousseff 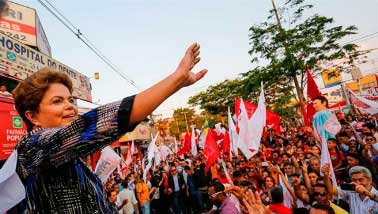 Some of the largest unions of Brazil marched in various cities in support of the President who they say is on "the side of the workers."

Brazil's biggest trade unions marched on Friday in support for the re-election of President Dilma Rousseff.

The national leader of the Central Workers Union (CUT), Vagner Freitas, said that the union has a "commitment to a second term for Rousseff for her defense of the labor law and the progress made by the working class in the last 11 years under the government of the Workers Party.”

Freitas also said that "we will elect the President who is on the side of workers, who is committed to our rights and not to the bankers and speculators."

The National President of Workers Confederation of Brazil, Antonio Neto, also warned that other candidates have spoken of removing the rights won over years of struggle and should not be supported.

Rousseff looks to receive 38 percent of the first round vote according to recent polls, but in the likely runoff is neck and neck with her rival Marina Silva.