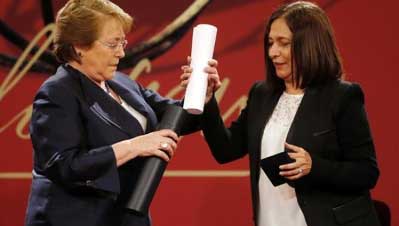 For second consecutive year, the prize goes to a Cuban poet. Bachelet pointed out that “Reina Maria Rodriguez receives Pablo Neruda Prize 10 years after its creation and she is the youngest poet who has received the prize from a Chilean president”.

Bachelet added, “her background is that of a woman who started publishing from very early, who has obtained acknowledgments from her country and from outside Cuba; she has written amazing prose and poetry”.

The Chilean president recognized Rodriguez’ talent to “articulate voices”, pointing out that poets like Reina Maria, “who understander that poetry is a collective wealth, a common mystery that works out when poets read each other, listen to each other, is when they can compare their points of view and their experiences of the poetical phenomenon”.

Reina Maria Rodriguez says that the prize is a proof “that Cuban literature is a literature mainly of poets and that literature is not a territorial issue, it could be anywhere”.

The jury was headed by the Minister Barattini, and integrated by Jose Kozer (Cuba), former winner of 2013 edition, Graciela Araoz (Argentina), Pablo Brodsky (Chile), Julio Ortega (Peru) and Malu Urriola (Chile); Rodríguez won the Prize by unanimous decision. She won 60,000 dollars and the compromise to edit and publish a poetic anthology.